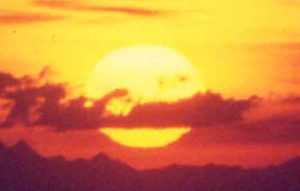 Exposure to the sunshine increases ghrelin in the body, which in turn stimulates a desire for food and other pleasures, especially in males.

Ghrelin, also known as the hunger hormone, is a hormone released mainly by the stomach, but also by the skin.

The hormone ghrelin is involved in the desire to eat because it activates the brain’s gratification mechanisms.

Ghrelin plays a very important role in controlling the release of growth hormone (GH) by the pituitary gland influencing all addictions: smoking, drugs, alcohol, sex and so on.

Ghrelin affects many crucial processes in the body and should therefore be treated with extreme caution.

Environmental factors that control ghrelin secretion are music, light and odours, but the underlying mechanisms have not yet been explained.

Although the stomach is the main source of ghrelin secretion, gastrectomy only reduces it by 65%, suggesting that other tissues also produce it.

One of these tissues could be the skin, as ghrelin has been found expressed in the epidermis and dermis, as well as in the hypodermis of subcutaneous adipose tissue.

In females, estrogen interferes with the p53–chromatin interaction on the ghrelin promoter, thus blocking ghrelin and food-seeking behavior in response to UVB exposure.

These results identify the skin as a major mediator of energy homeostasis and may lead to therapeutic opportunities for sex-based treatments of endocrine-related diseases.

A direct link between the skin and the brain was demonstrated in a study showing that UVB exposure induces the release of urocanic acid from the skin to the blood, which is converted to glutamate in brain neurons, leading to improvements in motor learning and object recognition in mice.

Ghrelin enhances learning and has anti-anxiety effects and neuroprotective functions.

It will be interesting to further study whether skin-mediated induction of ghrelin production directly improves brain function, such as memory and learning abilities and whether there are additional hormones released from the skin that modify human behavior.