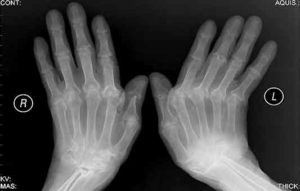 Rheumatoid arthritis patients getting little or no relief from conventional small-molecule drugs and injectable biologic drugs saw substantial improvement in their condition from daily use of an experimental compound in a large 24-week study led by a Stanford University School of Medicine investigator.

A paper describing the results of the double-blind, randomized phase-3 clinical trial was published July 23 in JAMA.

“For patients who haven’t done well on other therapies, these findings are cause for optimism, enthusiasm and hope,” said Mark Genovese, MD, professor of immunology and rheumatology and principal investigator of the study.

Mark Genovese is the paper’s lead author. The senior author is Tsutomu Takeuchi, MD, PhD, professor of rheumatology and clinical immunology at Keio University School of Medicine in Tokyo, Japan.

Rheumatoid arthritis is a progressive, systemic autoimmune disease affecting at least 1 in every 100 people worldwide.

For reasons that aren’t understood, 3 of every 4 people with the disorder are women.

While its most visible hallmarks are pain, stiffness, inflammation and eventual deterioration of joints, patients also are at heightened risk for cardiovascular disease and other inflammatory complications.

In clinical trials, about 70% of rheumatoid arthritis patients have appeared to benefit initially from small-molecule therapies in a pill form, such as methotrexate, said Genovese, who is the James W. Raitt M.D. Professor.

However, “in the real world, adherence to any of them is more like 50%,” he said.

Patients for whom the conventional small-molecule drugs fail are switched to pricey, injectable, bioengineered-protein drugs, including three of the world’s top-15 biggest-selling drugs in dollar sales.

But these drugs, too, fail among about half the rheumatoid arthritis patients who use them, Genovese said.

The experimental compound, filgotinib, is a selective JAK-1 inhibitor.

It works by preferentially blocking 1 of a set of 4 closely related enzymes required for certain inflammatory signaling processes within cells.

Two other compounds that are similar in mechanism of action to filgotinib but that impede JAK enzyme family members less selectively are licensed in the United States for use by rheumatoid arthritis patients, but only at low doses or with warning labels due to side effects.

The trial was conducted in 114 centers in 15 countries, mostly in North America and Europe.

The 449 participants averaged 56 years of age, and about 80% of them were female.

The primary goal of the study was to observe whether there was an improvement at 12 weeks into the trial of at least 20% on a measure of joint swelling and tenderness called the ACR20 that was established by the American College of Rheumatology.

An important secondary outcome was a score indicating low disease activity in 28 predetermined joints on a test called the DAS28-CRP.

Compared with the placebo group, a significantly greater proportion of participants on both the high- and low-dose filgotinib regimens achieved the primary endpoint: a 20% improvement in symptoms as measured by the ACR20.

Of equal or even greater importance, Genovese said, was the participants’ improvement on the DAS28-CRP at both 12 and 24 weeks.

These outcomes continued or improved over the course of the trial.
By 24 weeks, 48.3% of the high-dose filgotinib recipients and 37.9% of those on the low dose had reached low-disease-activity status.

By week 12 of the trial, 22.4% of high-dose and 25.5% of low-dose filgotinib recipients, but only 8.1% of placebo recipients, had DAS28-CRP scores indicating outright remission.

The drug’s benefits to participants became apparent soon after the trial’s onset. “We could see improvements as early as two weeks into the trial,” Genovese said.

Also telling was a substantial difference among the study arms in how many participants completed the 24-week trial.

Of the 148 participants in the placebo arm, 51 dropped out before completion.

Investigators’ early concerns about increased susceptibility to infections, or the re-emergence of active forms of prior infections, such as tuberculosis or shingles, were assuaged by the relative smattering of such adverse events, compared with placebo.

Overall response rates to filgotinib appear to surpass those of the other commercially available JAK inhibitors at doses approved for use in the United States, he said.

The trial was funded by Gilead Sciences, a biopharmaceutical company that holds the rights to filgotinib. The company has announced its intention to file for Food and Drug Administration approval of the drug.

Genovese is a consultant for Gilead.