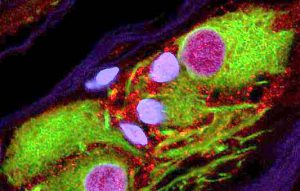 A new study suggests that the toxic protein buildup that’s linked to Parkinson’s may begin in the appendix: people who’d had their appendix removed – appendectomy – earlier in life had a lower chance of developing Parkinson’s disease.

People who’d had their appendix removed had a 19.3% lower chance of Parkinson’s disease.

Those who lived in rural areas and had an appendectomy had an even lower chance, 25.4%.

The findings also solidify the role of the gut and immune system in the genesis of the disease, and reveal that the appendix acts as a major reservoir for abnormally folded alpha-synuclein proteins, which are closely linked to Parkinson’s onset and progression.

Many brain cells of people with Parkinson’s contain Lewy bodies, which are unusual clumps of the protein alpha-synuclein.

Clumps of this protein are thought to be toxic to the cells and lead to their death.

This protein has also been shown to accumulate in the gut of Parkinson’s patients.

There is evidence that the protein may be able to travel from the gut to the brain via the connecting vagal nerve.

Gastrointestinal symptoms are often associated with Parkinson’s disease and can start up to 20 years before the symptoms of brain cell degradation.

A team led by Dr. Viviane Labrie at the Van Andel Research Institute sought to explore whether the gut could be involved in triggering Parkinson’s disease.

They focused on the appendix.
Despite its reputation as a useless organ, the appendix is an immune tissue involved in the body’s defense against microbes and helps regulate bacteria in the intestine.

The team analyzed the records of nearly 1.7 million people whose health information was tracked for up to 52 years.

They compared the chances of developing Parkinson’s disease among those who’d had their appendix removed with those who hadn’t.

The team also found a build-up of the toxic form of alpha-synuclein in the appendixes of healthy volunteers.

This suggests that the appendix may be a reservoir for the disease-forming protein and may be involved in the development of Parkinson’s disease.

“We were surprised that pathogenic forms of alpha-synuclein were so pervasive in the appendixes of people both with and without Parkinson’s.
It appears that these aggregates — although toxic when in the brain — are quite normal when in the appendix.
This clearly suggests that their presence alone in the gut cannot be the cause of the disease,” Labrie said.