Researchers found a new way to regenerate cartilages in the joints 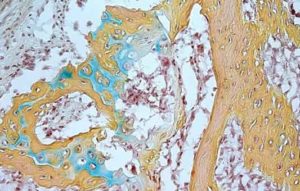 The Stanford researchers figured out how to regrow articular cartilages by first causing slight injury to the joint tissue, then using chemical signals to steer the growth of skeletal stem cells as the injuries heal.

In 2019 French researchers from Inserm and Université de Strasbourg at Unit 1260 Regenerative Nanomedicine have developed an implant which, when applied like a wound dressing, regenerates cartilage in the event of major joint lesions and incipient osteoarthritis.

The new work builds on previous research at Stanford that resulted in isolation of the skeletal stem cell, a self-renewing cell that is also responsible for the production of bone, cartilage and a special type of cell that helps blood cells develop in bone marrow.

Damaged cartilage can be treated through a technique called microfracture, in which tiny holes are drilled in the surface of a joint.

The microfracture technique prompts the body to create new tissue in the joint, but the new tissue is not much like cartilage.

“Microfracture results in what is called fibrocartilage, which is really more like scar tissue than natural cartilage,” said Chan.
“It covers the bone and is better than nothing, but it doesn’t have the bounce and elasticity of natural cartilage, and it tends to degrade relatively quickly.”

For a long time, Chan said, people assumed that adult cartilage did not regenerate after injury because the tissue did not have many skeletal stem cells that could be activated.

But what if the healing process after microfracture could be steered toward development of cartilage and away from fibrocartilage?

The researchers knew that as bone develops, cells must first go through a cartilage stage before turning into bone.
They had the idea that they might encourage the skeletal stem cells in the joint to start along a path toward becoming bone, but stop the process at the cartilage stage.

“What we ended up with was cartilage that is made of the same sort of cells as natural cartilage with comparable mechanical properties, unlike the fibrocartilage that we usually get,” Chan said. “It also restored mobility to osteoarthritic mice and significantly reduced their pain.”

As a proof of principle that this might also work in humans, the researchers transferred human tissue into mice that were bred to not reject the tissue, and were able to show that human skeletal stem cells could be steered toward bone development but stopped at the cartilage stage.