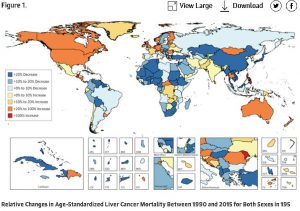 Deaths from liver disease have been rising rapidly in the U.S.: the most pronounced increase between 2009 and 2016 was a 10.5 percent rise each year in cirrhosis deaths among people 25 to 34 years old, mainly driven by heavy alcohol consumption, researchers report in The BMJ.

Deaths due to cirrhosis are expected to triple by 2030.

Projected increases in the burden of cirrhosis are thought to be driven primarily by the increasing prevalence of alcoholic liver disease and non-alcoholic fatty liver disease.

The incidence and impact of cirrhosis related complications is uneven across the USA, with substantial geographic and demographic variability.

In a new study researchers describe the temporal trends in liver disease related deaths in US adults.

Normally liver failure takes a long time to develop, Dr. Elliot Tapper, a liver specialist, a professor at the University of Michigan in Ann Arbor and first author of a new study said. 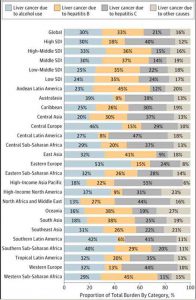 It implies a different and more intense form of alcohol abuse, people consuming substantial amounts of alcohol every day, in other words, regular binge drinking, not just on the weekends.

For more information
Mortality due to cirrhosis and liver cancer in the United States, 1999-2016: observational study
Link…

Centers for Disease Control and Prevention (CDC) report
Trends in Liver Cancer Mortality Among Adults Aged 25 and Over in the United States, 2000–2016
Link…

During binges, U.S. adults have 17 billion drinks a year
Link…