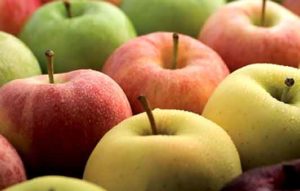 Water with a dash of baking soda is the most effective way to remove pesticide residue from fresh apples, new research shows.

The study, led by Lili He, Associate Professor at the Department of Food Science and Department of Veterinary and Animal Sciences, University of Massachusetts, investigated the effectiveness of commercial and homemade washing agents in the removal of surface and internalized pesticide residues from apples.

Surface pesticide residues were most effectively removed by sodium bicarbonate (baking soda, NaHCO3) solution when compared to either tap water or Clorox bleach.

Using a 10 mg/mL sodium bicarbonate washing solution, it took 12 and 15 min to completely remove thiabendazole or phosmet surface residues, respectively, following a 24 h exposure to these pesticides, which were applied at a concentration of 125 ng/cm2.

Results showed, however, that 20% of applied thiabendazole and 4.4% of applied phosmet had penetrated into the apples following the 24 h exposure.

This study gives us the information that the standard postharvest washing method using Clorox bleach solution for 2 min is not an effective means to completely remove pesticide residues on the surface of apples.

In the presence of sodium bicarbonate, thiabendazole and phosmet can degrade, which assists the physical removal force of washing.

The overall effectiveness of the method to remove all pesticide residues diminished as pesticides penetrated deeper into the fruit.

Peeling is more effective to remove the penetrated pesticides; however, bioactive compounds in the peels will become lost too.