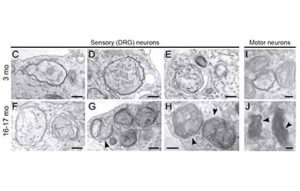 Cells dispose of harmful garbage through autophagy, a normal and necessary process in which aggregated proteins and dysfunctional structures are handled.

Penn study finds that as cells age, their ability to remove damaged proteins and structures declines, which could be a risk factor for neurodegenerative brain diseases.

If any part of this fails, waste builds up inside cells, eventually killing them.

According to a new study from the Perelman School of Medicine at the University of Pennsylvania, as cells age, their ability to shed harmful refuse declines.

The findings suggest that the deterioration of autophagy in aged neurons—cells that never replicate and are as old as the bodies they inhabit—could be a risk factor for a suite of neurodegenerative diseases such as ALS (amyotrophic lateral sclerosis), Alzheimer’s, and Parkinson’s.

Using live-cell imaging of neurons from young and aged mice, Erika Holzbaur, PhD, a professor of Physiology, and first author Andrea Stavoe, PhD, a postdoctoral fellow in Holzbaur’s lab, published their study this week in eLife.

The importance of autophagy was recognized in 2016 with the Nobel Prize in Physiology or Medicine.

“The current thinking among scientists is that a decline in autophagy makes neurons more vulnerable to genetic or environmental risks,” Holzbaur said.

“What motivates our line of research is that most neurodegenerative diseases in which a deterioration of autophagy has been implicated, such as ALS, and Alzheimer’s, Huntington’s and Parkinson’s diseases, are also disorders of aging,”.

At the start of autophagy, a component within the cell, called an autophagosome, engulfs misfolded proteins or damaged structures to be degraded, essentially sequestering this waste in a biological trash bag.

The autophagosome then fuses with a second cellular structure, called a lysosome, that contains the enzymes needed to breakdown the garbage, allowing the components to be recycled and reused.
This elegant waste-removal stream is what keeps neurons healthy, but in its absence, neurons eventually die due to the buildup of unattended refuse.

While early stages of autophagosome formation were unaffected, they found frequent stalling in their formation in aged mice, while the ones that did form were misshapen.

These defects may allow the trash to accumulate at neuronal synapses.

Stavoe notes that in other studies autophagosomes with misformed membranes have been observed in deceased human brain tissue from donors with neurodegenerative disease.

This rescue is dependent on the level of activation of WIPI2B, providing insight into the biological regulation of autophagosome formation.

On the other hand, when researchers took WIPI2B out of young neurons, autophagosome formation stalled.

“This stunning and complete rescue of autophagy using one protein suggests a novel therapeutic target for age-associated neurodegeneration,” Stavoe said.

Other co-authors are Pallavi Gopal from Yale University, and Andrea Gubas and Sharon Tooze, from The Francis Crick Institute, London.

Researchers Find Textbook-Altering Link Between Brain, Immune System (2015-06-10)
Link…
“… The unexpected presence of the lymphatic vessels raises a tremendous number of questions that now need answers, both about the workings of the brain and the diseases that plague it.
For example, take Alzheimer’s disease.
“In Alzheimer’s, there are accumulations of big protein chunks in the brain,” Kipnis said. “We think they may be accumulating in the brain because they’re not being efficiently removed by these vessels.” He noted that the vessels look different with age, so the role they play in aging is another avenue to explore…”

Perelman School of Medicine at the University of Pennsylvania
Link…