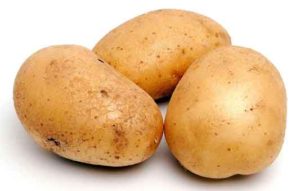 In addition to many nutritionally valuable ingredients, potatoes can also contain glycoalkaloids which are typical for this plant family.

The most common glycoalkaloids that occur in potatoes are α-solanine and α-chaconine.

These secondary ingredients serve as a defence mechanism against pests and germs.

The glycoalkaloids are enriched in particular in green, germinating and damaged potatoes and in potato peel.

Increases of solanine in the potato peel are closely associated with green-ing (synthesis of chlorophyll) of the peel. These biochemical processes are independent of each other, but are both activated by light. 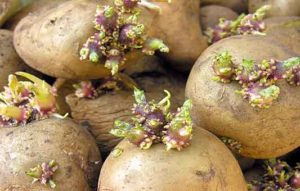 The consumption of green, sprouting or damaged potatoes can lead to poisoning through gly-coalkaloids.

Cases of minor poisoning cause symptoms such as nausea, stomach-ache, vomiting and diarrhoea, sometimes accompanied by fever.

In severe cases, impairment of consciousness and very rarely complete loss of consciousness can occur, along with dis-turbances in brain function, breathing and in the cardiovascular system. There are also reports of isolated instances of deadly poisoning.

The potato alkaloids exert their toxic effects on the nervous system by interfering with the body’s ability to regulate acetylcholine, a chemical responsible for conducting nerve impulses.
Potato glycoalkaloids also act by general disruption of membranes.

A reminder on the following standard recommendations relating to the storage and preparation of potatoes to keep intake of glycoalkaloids as low as possible:

Potatoes should be stored in a cool, dark and dry place and green parts and so-called “eyes” should be generously removed.

Old, dried up, green or sprouting potatoes, as well as potatoes with several green parts and snacks made from potato peelings, are not suitable for consumption.

If consumers want to eat the skin along with the potato, only un-damaged, fresh potatoes are fundamentally suited for this purpose.

Small children in particular should not eat unpeeled potatoes.

Consumers should not reuse the water in which potatoes have been boiled and deep-frying fat for potato products should be changed regularly.

Do not eat potato dishes that have a bitter taste.

Cold sweetening can increase overall acrylamide levels, especially if the potatoes are then fried, roasted or baked.

Raw potatoes should be stored in a dark, cool place at temperatures above 6°C.