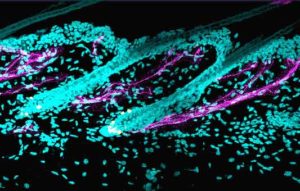 Stress can cause hair to gray prematurely by affecting the stem cells that are responsible for regenerating hair pigment.

The idea that acute stress can cause hair to turn gray is a popular belief, but there has been little scientific validation of this link.

Hair color is determined by cells called melanocytes, which produce the pigment melanin.

New melanocytes are made from melanocyte stem cells that live within the hair follicle at the base of the hair strand.

As we age, the hair that regrows from hair follicles that have lost melanocyte stem cells has less pigment and appears gray.

Researchers set out to determine if stress could also cause hair to gray, and if so, how.

Having established a link between stress and graying, the scientists then explored several potential causes. 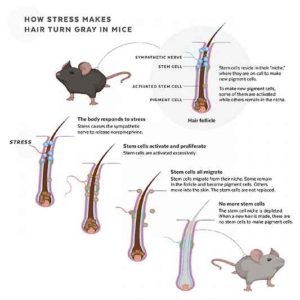 They first tested whether immune attack might be responsible for depleting melanocyte stem cells.
But stressing mice with compromised immune systems still led to hair graying.

The team then investigated the role of the stress hormone corticosterone, but altering its levels didn’t affect stress-related graying.

The researchers eventually turned to the neurotransmitter noradrenaline, which, along with corticosterone, was elevated in the stressed mice.

They found that noradrenaline, also known as norepinephrine, was key to stress-induced hair graying.

By injecting noradrenaline under the skin of unstressed mice, the researchers were able to cause melanocyte stem cell loss and hair graying.

Noradrenaline is also the main neurotransmitter of the sympathetic nervous system, which is responsible for the “fight-or-flight” reaction in response to stress.

The team ultimately discovered that signaling from the sympathetic nervous system plays a critical role in stress-induced graying.

Sympathetic nerves extend into each hair follicle and release noradrenaline in response to stress.

Normally, the melanocyte stem cells in the follicle are dormant until a new hair is grown.

The stem cells all convert into pigment-producing cells, prematurely depleting the reservoir.

With no remaining stem cells, no new pigment cells can be made, and any new hair becomes gray, then white.

“After just a few days, all of the melanocyte stem cells were lost. Once they’re gone, you can’t regenerate pigments anymore. The damage is permanent.”Hsu says.