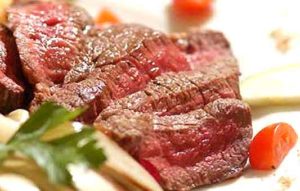 An enzyme that releases an inflammation-causing carbohydrate called N-glycolylneuraminic acid (Neu5Gc) from meat has been identified in gut bacteria: preventing this carbohydrate from entering the body’s tissues could potentially reduce the risk of diseases associated with eating red meat.

Diet can alter the microbes living in the gut: research has shown that changes to the gut microbiome may contribute to obesity, diabetes, and cancer.

Studies have linked diets that are high in red meat to colon cancer, heart disease, stroke, and other diseases.
The reasons appear to be complex, and researchers have been working to understand the factors involved.

One suspected compound is the carbohydrate (a type of sugar molecule) called N-glycolylneuraminic acid (Neu5Gc).

While most mammals produce the sugar, humans lost a functional copy of the gene needed to produce Neu5Gc several million years ago.

However, when people eat things with Neu5Gc like red meat, the Neu5Gc can be incorporated into their cells.

The researchers think Neu5Gc may be harmful is that the immune system recognizes it as foreign and makes antibodies against it causing inflammation, the body’s natural response to protect against something harmful.

This could be why diets rich in red meat diets have been linked to inflammatory diseases like colon cancer and forms of heart disease.

A research team led by Dr. Karsten Zengler of the University of California, San Diego, explored how gut bacteria are affected by a Neu5Gc-rich diet.

The team studied mice that were genetically modified so that, like humans, their only source of Neu5Gc was through diet.

When the researchers examined fecal samples, they found significant differences in the bacteria from the genetically modified mice compared to unmodified mice.

Mice fed a Neu5Gc-rich red meat diet had fewer types of bacteria in their gut microbiomes than those fed a soy-based diet.

However, several types of bacteria were more abundant: this included Bacteroides, which are known to be efficient at using sialic acids, the family of sugars that includes Neu5Gc.

Using DNA sequencing, the researchers identified increases in Bacteroides enzymes called sialidases in the mice that ate the red meat diet. They suspected that the bacteria use this enzyme to release Neu5Gc from cells.

The team then examined whether sialidases were also increased in the human microbiome when eating red meat.
They examined data from a group of unique hunter-gathers who live in a remote region of Tanzania. The Hadza eat meat only during the dry season when hunting is possible. In the wet season, they eat mostly honey and berries.

Bacteroides with similar sialidase genes were much more likely to be present in the gut during the dry season.

In the lab, the sialidases were able to strip Neu5Gc from store-bought beef and pork sausage when it was cut up and crushed into a suspension.

However, further work needs to be done to understand the role of Neu5Gc in human diseases that have been linked to diets rich in red meats.

“It’s our hope that this approach could be used as a sort of probiotic or prebiotic to help reduce inflammation and the risk of inflammatory diseases—without giving up steak,” Zengler says.