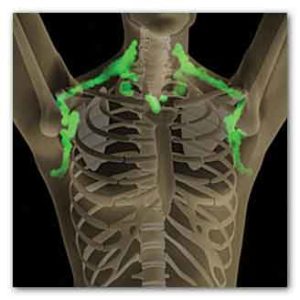 A team led by Dr. Shingo Kajimura at the University of California, San Francisco, carefully analyzed blood levels of glucose, fats, and amino acids before and after activation of brown fat in 33 healthy young men (average age about 23 years old).

Based on measurements taken at normal room temperature, the team classified 17 of the men as having high brown fat activity and 16 as low activity.

They then exposed the men to a temperature cold enough to activate their brown fat (but not low enough to cause them to shiver) for two hours. 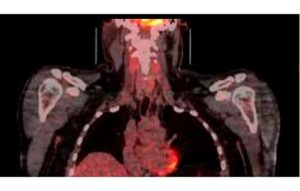 When the body is cold, brown fat is activated to
use sugar, fat, and amino acids from the blood to
generate heat. Top: Brown fat is not activated.

The team found that the men with high brown fat activity had reduced levels of compounds called branched chain amino acids (BCAAs) in their bloodstreams.

This change wasn’t seen in the men with low brown fat activity. Experiments in obese mice confirmed that cold exposure reduced BCAAs in rodents with brown fat, too.

BCAAs include three essential amino acids—valine, leucine, and isoleucine that are important for many functions in the body.
For example, your muscles can use BCAAs to provide energy during exercise. 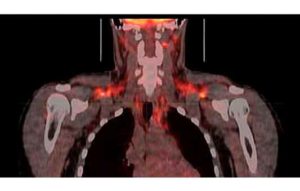 Bottom:
Cold conditions activate the brown fat, as shown by the
orange color on both shoulders and the neck. Labros
Sidossis / Rutgers University

However, past studies have linked high levels of BCAAs with obesity, insulin resistance, and type 2 diabetes in people and rodents.

The scientists carried out a series of experiments to further investigate the relationship between brown fat and BCAAs.

They found that brown fat produces a protein called SLC25A44 upon cold exposure. SLC25A44 brings BCAAs into mitochondria, the cell’s energy compartment, where they are used to produce energy and generate heat.

Blocking this process in mice led to higher BCAA levels, obesity, and signs of diabetes.

“The findings suggest that boosting SLC25A44 activity, thereby enhancing BCAA utilization, may be a promising strategy for removing excess BCAAs from the bloodstream and potentially treating conditions such as obesity and diabetes,” Kajimura says.

Checking your smartphone is as contagious as...